Inclinometers, also called tilt sensors, clinometers, or slope sensors, are designed to measure the angle of an object with respect to the force of gravity. These tilt or level meters determine the pitch and/or roll angle and output these values via the appropriate electrical interface.

Inclinometers measure the orientation angle of an object with respect to the force of gravity. This is done by means of an accelerometer, which monitors the effect of gravity on a tiny mass suspended in an elastic support structure. When the device tilts, this mass will move slightly, causing a change of capacitance between the mass and the supporting structure. The tilt angle is calculated from the measured capacitances. 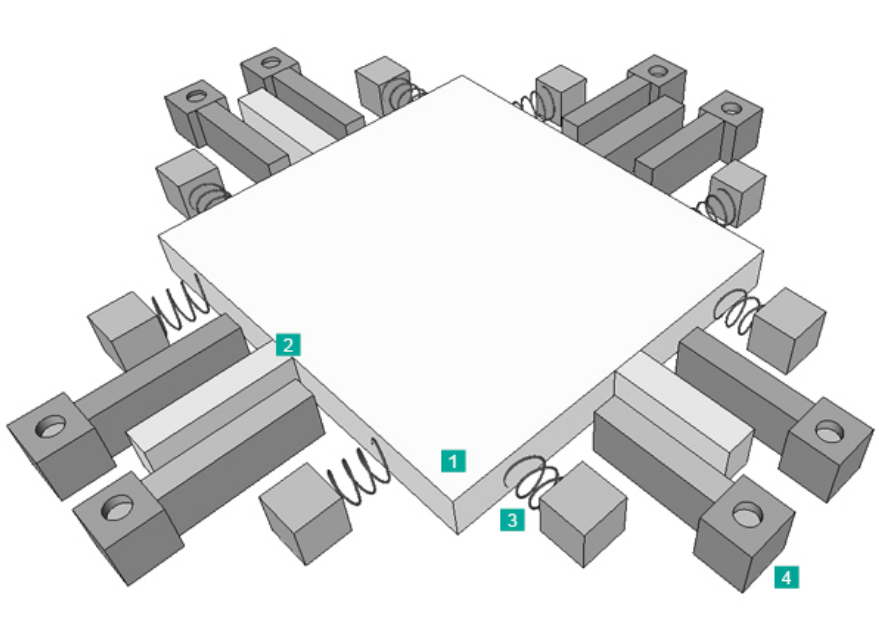 Fig. 1: Principle of a MEMS sensor

The function can be illustrated with a simplified model with two electrodes: one fixed, and the other (the proof mass) is movable, suspended by spring elements (see Fig. 1). When the inclinometer is in a horizontal position (Fig. 2.1), the capacitance between the electrodes is measured. If the sensor is tilted (Fig. 2.2), the movable mass and its electrode will change position relative to the fixed electrode. This resulting change of capacitance between the two electrodes is measured by the sensor cell and used to calculate the new inclination value.

Fig. 2: Position of a MEMS sensor

This working principle has been proven in many industrial and commercial applications, such as mobile phone motion sensors and car airbags. These consumer applications usually require low-grade accelerometer cells which typically deliver accuracies of less than 1 degree. Unlike low consumer-grade inclinometer cells, the MEMS sensors used in TILTIX inclinometers contain an array of precise electrodes to improve the resolution and accuracy of the measurement. For TILTIX inclinometers that are designed for static or near-static measurements, the moving mass in the MEMS is physically damped to reduce the sensitivity of these sensors to frequencies above 29 Hz.

In case of strong shock and vibration, the physical damping in static inclinometers might not be sufficient to suppress disturbances. Software filters can only help to a limited extent in reducing the impact of such disturbances. For static TILTIX inclinometers, ”moving average” or “exponential” filters can be activated and configured to smoothen the signal, but with the downside that the fast reaction time of the MEMS inclinometer is lost and the response of the sensor becomes slower.

For dynamic movements with strong accelerations, POSITAL’s Dynamic TILTIX inclinometers should be used. They are based on a different technology without physical damping so that there is no tradeoff between stability and response time.

Interested in learning more about static and dynamic Inclinometers? We would be happy to discuss specifications further. Contact us using the form below.

Have you found a sensor that’s right for you? Not sure what sensor is the right fit?

Regardless of where you are in the process…

Fill out the form below and we’ll help you find the RIGHT sensor at the RIGHT price!