As collaborative robots expand into manufacturing environments the issue of safe motion continues to be a concern. Current design approaches involve adding force sensors, torque sensors, and sometimes proximity sensors. These adders along with more complex software control algorithms mitigate most of the concerns and result in slower operation. Unfortunately, these additional sensors also add significant cost and complexity. 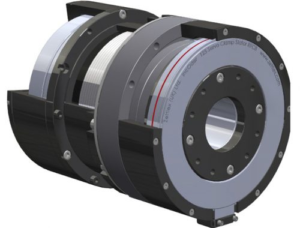 Selective Compliance Articulated Robot Arm (SCARA) robots use multiple motorized robot joints. Each robot joint contains a drive motor, gear system and encoder. The global quest for reducing size, weight and complexity is driving highly integrated designs. One of the major disadvantages in this electro-mechanical system is lack of rotation stiffness. This is mainly due to the zero backlash harmonic gearing using a flexure to transmit motion.

Mechanical stiffness (or lack of stiffness) directly impacts the dynamic performance and accuracy of any system. When cantilevered arm extensions are coupled to a motorized joint, the problem is compounded as the load can vary significantly with each robot pose. The output of the joint may move when there is no movement at the input (motor) side of the joint. This torsional windup will impact dynamic performance as well as accuracy. Information about the stiffness characteristics as a function of load are readily available from the gear suppliers. Some research shows that under the right manufacturing process and lubrication, the non-linear aspects of compliance are repeatable over the useful life of the gearing.

A torque transducer is a torsional spring with a measurement system that can detect the twist and provide an output. A brushless permanent magnet synchronous electric motor produces torque proportional to current. Each robot joint has an encoder, and most collaborative robots now have dual encoders. Therefore, each joint has two possible measurement systems for torque; the measured twist versus position, and the motor current versus torque.

The torsional spring function and the torque versus current function are both measurable and repeatable. Each function will need to be calibrated during the manufacturing process to remove assembly variances and normal tolerances. There are some limitations with temperature changes, but they are typically less than 2% within normal collaborative robot environments.

A highly integrated robot joint design typically uses a direct drive motor, (large diameter and short length) coupled to high ratio gearing. Since the output speed is relatively low, typically 50-500 rpm, the gear set is a worthy trade-off to move the motor power peak to a higher speed maximize the torque density and efficiency. A direct drive motor coupled to a high ratio low profile gear system is the best solution for torque and size and tends to be the norm in the industry. Note: there are direct drive approaches that rival this path, but only for very low weight, light payload systems like semiconductor wafer processing.

In smaller robots, harmonic gear solutions are becoming the best alternative for high ratio gearing due to their light weight, low profile, and zero backlash. Ratios in the 50-150:1 range are commonly used and higher ratios (up to 300:1) are also available. The main concern with harmonic gearing solutions is that they are based on a flexure that transmits the motion between the input and the output. This flexure is beneficial to avoid backlash, but it contributes to low rotary stiffness compared to tooth-to-tooth contact of normal gears.

A designer can always move to a larger harmonic gear solution to improve stiffness, but that typically results in extra size and weight. The larger size gearing may also be overkill for the application. A better path is to keep the small size and low weight and compensate for the stiffness and use this repeatable torsional spring as a virtual torque sensor. Measuring the input and output joint simultaneously provides enough information to have a closed loop algorithm around stiffness to both eliminate its negative effects and measure the torque at the same time.

Below is an example of a Celera Motion robot joint with a slotless frameless motor kit, a harmonic gear solution, and dual encoders, (one on the input and one on the output). 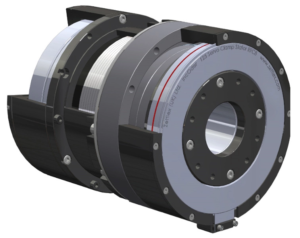 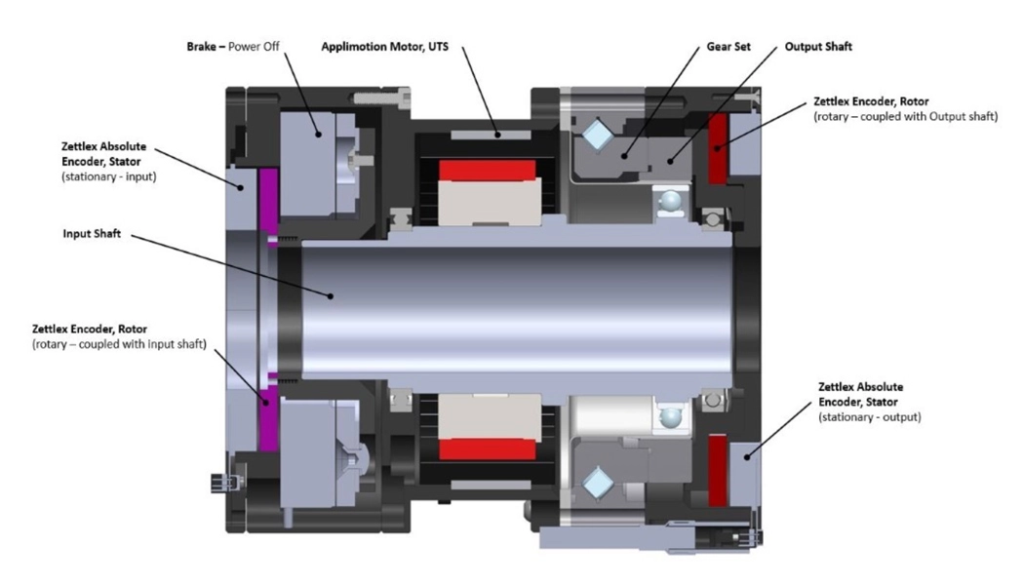 The above cross-section defines the major components of a Celera Motion dual encoder robot joint. The components include: 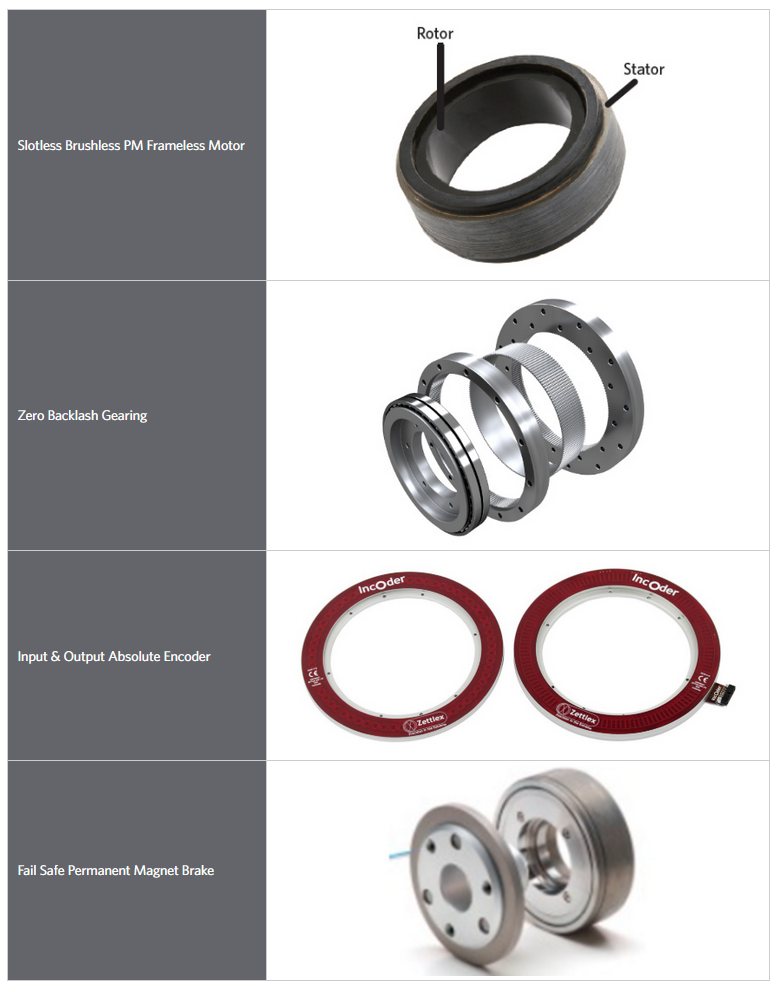 Traditional robot kinematic movements allow loads and reflected inertia to vary considerably with different robot poses. The stiffness of each joint is a non-linear phenomenon that depends on load, direction and position. A lack of stiffness creates windup between the joint’s drive motor and the joint’s output. This residual loading has to be overcome before the motor control algorithm can feedback signals to robot controller about any external forces applied to the robot arm.

Understanding and modeling stiffness will also greatly improve throughput adding to the control loop corrections and improving bandwidth. The plot below is measured data from a harmonic gear set. It identifies the lost angle when torque is applied as well as additional hysteresis that depends on the direction of motion and load. 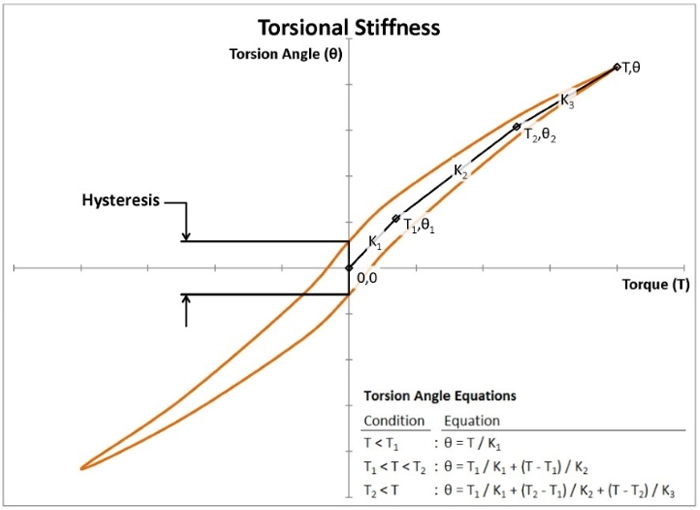 Included in the plot is a piecewise linear approximation for the non-linear aspects of this curve. The equation does not cover the hysteresis effects based on motion direction, however. A joint research effort by Harmonic Drive and Universiteit Leuven Celestijnenlaan in Belgium resulted in a technical paper that includes a complete mathematical model for the lost motion proportional to load including the hysteresis. The model is 95% accurate and could be used as part of an alogoithm in a motion controller to detect load based on position differences.

One condition of concern is the repeatability of this torsional spring over the life of the gearing. The following graph show that while other attributes of the harmoinc gearing change over the useful life, the stiffness characterization doesn’t change, (with the proper lubrication). 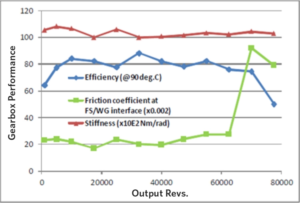 The optimum solution for torque sensing is to use a torque sensor at the joint output. As discussed above, this can be cumbersome and costly. However, based on the above technical data, we have two options for sensing torque inside the robot joint, without adding a physical torque sensor.

Dual encoders can be used with model for gearing stiffness/hysteresis to sense torque. The phenomenon is repeatable and both encoders are already present in the assembly. This will just take an algorithm in the motor controller that identifies direction, and encoder difference. A simple test after assembly can pre-calculate the equation constants and characterize the gearing.

Sinusoidal FOC (field oriented control) of motor current coupled to the cog-less slotless motor already provides repeatable torque output based on phase current measurements. The absolute accuracy of the torque value under these conditions will vary with published motor parameter tolerance, which is typically +/- 10%. A simple measurement of the actual torque constant after robot joint assembly can tighten this variability and increase the accuracy of using motor current as torque sensor. Final accuracy will depend on measurement conditions.

In most cases, force detection is used to make a robot more collaborative. If an external force is applied to the robot, (by a human, for example), it is detected by a series of sensors allowing the controller to make a decision on an alternative response. This response may be to stop motion, reduce speed, reduce force output, or change direction.

There are two main methods used in collaborative robots today for detection and measurement of force or torque; load cells and motor current. The above technical note adds a third possible torque measurement system using dual encoders and a math model for the harmonic gearing system. The above technical note also suggests that the motor torque accuracy can be improved by a simple parameter test after robot joint assembly.

Using these two virtual torque sensing options may eliminate the need for a physical load cell-based torque sensor, and its associated cost and complexity.

Have you found a sensor that’s right for you? Not sure what sensor is the right fit?

Regardless of where you are in the process…

Fill out the form below and we’ll help you find the RIGHT sensor at the RIGHT price!